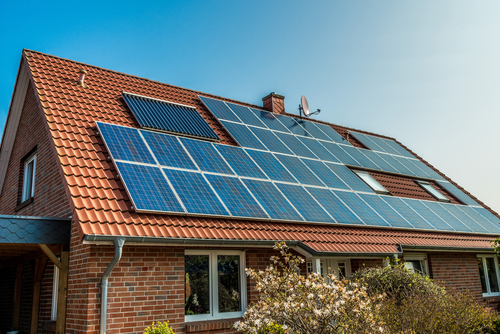 In this series, I (Jin Choi) talk about my goal of reaching $1 million in my TFSA account by 2033. If you want to know what a TFSA is, I recommend you read my free book. In addition, I’ll outline my thoughts on how quickly renewable energy could replace fossil fuels in the future.

At the end of January, I had $47,181 in my TFSA account. While this number is up by $1,066 from last month, that was solely because I contributed $5,500 to the account during the month. Taking my contributions into consideration, my TFSA went down by 9.5% during the month. By comparison, the Canadian stock market went down by 1.2%, while U.S. stocks went down by 4.5% in terms of Canadian dollars. Therefore, my portfolio underperformed the broader stock market in January.

The majority of my portfolio currently consists of oil and gas stocks, so the performance of my portfolio is largely tied to oil. Oil prices dropped yet again, from $37.13 to $32.50/bbl in January, which caused my portfolio to go down in value. However, a significant portion of my portfolio still consists of non-oil stocks, and their prices went up, which limited my losses for the month.

I have talked about oil extensively these last few months, so I’ll refrain from talking about it too much again this month. For now, let me just make two comments.

First, oil inventories continued to suggest a slightly oversupplied oil market as of November. The International Energy Agency reported essentially no change in inventory levels in OECD countries during the month, while OPEC reported that inventories in the same region fell by 4.8 million barrels. For the record, I don’t know why there is a discrepancy between these numbers. Historically, inventories have fallen by roughly 10 million barrels in November, so you could say the implied oversupply was around 200,000 to 300,000 barrels/day back then (i.e. 7,500,000 barrels/30 days=250,000barrels/day).

On the other hand, inventories in the U.S. increased heavily in January, which suggests that the oversupply has grown. Inventories usually build in January, and it’s possible that other countries are experiencing a heavy drawdown in their inventories, but if that’s not the case, I may start to be concerned. Unfortunately, we won’t know January inventory numbers until March.

Second, oil prices began to rise in late January as Russia began to strongly hint that they’re open to cutting oil production. Saudi Arabia has long resisted calls to cut their own oil production, insisting that they would only cut if other large producers cut too.

Most oil analysts think that an agreement between Russia and OPEC is very unlikely. They say that the Saudis and Russians dislike and distrust each other. Iranians and the Saudis hate each other as well, which means that reaching any consensus even within OPEC is difficult.

However, it’s plain that cutting oil production will benefit every country involved. To bet that the talks will fail is to bet that each country will act contrary to their own national interests. For that reason, I don’t think anyone should totally write off the chance of co-ordinated cuts happening. I think the only appropriate response is to throw our hands up and say, we don’t know what will happen.

Since I became more committed to investing in oil, a few people asked me what I thought about renewable energy. They wondered if oil prices could stay low indefinitely, as people switch from using oil to using electricity generated from renewable sources such as solar and wind.

I have responded to such questions in the Q&A forum. Essentially, I replied that I’m not afraid of renewable energy displacing oil anytime soon because electric car sales are still tiny, and because oil is also used to make material such as plastic, which renewable energy can’t substitute.

That said, it’s only a matter of time before renewable energy does replace fossil fuels in general, since we will eventually run out of fossil fuels. Therefore, the question is, when will this happen? In this article, I want to delve into this question a bit further.

The most influential book I’ve read on this subject is a book called “Energy Transitions” by Vaclav Smil. Reading Smil’s book has given me, I believe, some crucial insight that I will attempt to share with you for the rest of this article. I recommend reading the book yourself if you want to learn more about the subject. Be warned, however, that the book is pretty dry, and reads like a long Wikipedia entry.

There are three big reasons why the uptake in renewable energy won’t be quick as say, the uptake of smartphones. These reasons are energy density, the lack of Moore’s law, and existing infrastructure. Let me explain each of these reasons.

Energy density refers to the amount of energy available for harvest per unit size of land. For example, with current technology, a solar power plant can generate somewhere between 4 watts and 10 watts per square metre of land. Today’s solar panels convert between 10 and 15% of energy that hits the panels, so a doubling of conversion efficiencies can theoretically double the energy density of solar power plants.

According to Smil’s calculations, solar is the most dense form of renewable energy around. The average wind turbine, for example, generates between 0.5 and 1.5 watts/m2. However, even solar’s energy density pales in comparison to that of fossil fuels’. Coal’s energy density, for example, is between 100 and 1,000 watts/m2, while natural gas’s is double that of coal’s.

The conclusion is that if the world were to replace fossil fuels with renewable energy, the world would have to devote between 10 to a 1,000 times more land in order to generate the same amount of energy. While this is not an insurmountable obstacle, you can see why the transition to renewable energy could take some time.

Upon observing Moore’s law in action in computers, some people came away with the impression that Moore’s law could apply to solar panels. Perhaps people got such an impression because both solar panels and computer processors are made of thin slices of silicon. Unfortunately, that’s where the similarities end.

Let’s think carefully about why Moore’s law has held for computer processors. The reason is because over time, chip manufacturers could gradually increase the precision of their tools. With more precision, they could decrease the size of each transistor and fit more into the same sized area. Because the surface area is the square of the length of a side, manufacturers could increase the number of transistors exponentially.

Unfortunately, this is not how solar panels work. Solar panel efficiency is not governed by the number of solar cells in the same unit area, but rather by things like the material used. Therefore, there’s no natural technological progression with which we can expect performance to increase exponentially. This is why solar panel efficiencies have increased only gradually over a long time. Also, efficiencies can’t go above 100% since panels can’t produce more energy than is available through sunlight. This limits the potential efficiency gains.

The outlook for energy efficiency gains for wind turbines is even more dismal. Currently, wind turbines are able to convert 30 to 40% of available wind energy into electricity. This is not too far from the theoretical limit of roughly 60% efficiency. Many other forms of renewable energy have similar challenges.

Since we can’t expect much greater renewable energy efficiencies in the future, we will have to make it up with volume. While not impossible, this is a daunting task.

A rough calculation shows that the world generates over 12.5 terawatts of energy through fossil fuels. The International Energy Agency projects that the world will add roughly 140 gigawatts of renewable energy generation capacity each year for the next five years. Assuming the world’s demand for energy stays constant, it will take more than 80 years at this pace for renewable energy to completely replace fossil fuels.

Of course, if the world quickly increases its capacity to create more renewable energy (e.g. creates more solar panel factories), the world could replace fossil fuels a lot sooner. However, Smil’s book has convinced me that this probably won’t happen because of costs. Cost is the third and last reason why I believe the transition to renewable energy will take a long time.

As Ugo Bardi documents in his book “Extracted”, the world has tended to transition away from using a resource only when it found cheaper substitutes. For example, people stopped using whale oil for lighting purposes only when its price rose substantially above that of kerosene, a derivative of crude oil. Sympathy for whales played little part in the transition.

The total cost to produce energy is divided between capital and operating costs. Capital costs refer to the up front cost a company needs to spend before it can produce a single unit of energy. For example, the cost to build a solar panel factory is a capital cost. Likewise, drilling an oil well is a capital cost for an oil company.

Operating costs, on the other hand, refer to costs that a company incurs in order to keep producing energy. For a solar factory, that cost might include costs to buy raw materials, and the cost to keep the factory in good order.

Unless the total cost of renewable energy is cheaper than just the operating costs of existing fossil fuel production, companies will continue to produce fossil fuels.

To illustrate why, let’s imagine that a company has a goal of producing 10 megawatts (MW) of energy generation capacity. The company has already spent $50 million worth of capital costs, and will need to spend $20 million on operating costs in order to generate the 10 MW. On the other hand, the company could spend $40 million in order to generate the same 10 MW using renewable energy. Which option would the company choose? It would choose fossil fuels.

The $50 million the company spent on capital costs is gone regardless of the choice it makes. Therefore, the real choice is between spending $20 million and $40 million to produce the same amount of energy. In consequence, even though the total cost of producing fossil fuels is higher ($70 million vs. $40 million), the company will still choose to produce fossil fuels.

Of course, the benefit of having spent capital costs doesn’t last forever. Oil fields and coal mines deplete. Refineries age,and will need heavy investments to be kept going. When such a time arrives, companies will choose which energy source to produce by comparing total costs to produce all sources of energy.

Unfortunately, it will take a long time for that to happen. A typical oil sands operation is expected to last over 25 years. Some coal mines have lasted over 100 years. Therefore, without a drastic reduction in renewable energy costs, the transition to renewable energy will happen very slowly, likely over many decades.

Although some sources of renewable energy, notably solar, are becoming cheaper over time, they still aren’t cheap enough to incentivize the world to abandon fossil fuels. Part of the problem is that setting up a power plant requires a lot of human labour, which limits the speed with which renewable energy sources can become cheaper.

For example, solar power panels have become much cheaper over time, dropping from over $6/watt to just over $1/watt today. However, installing solar panels on a residential roof costs $5-6/watt by one estimate. Although these costs are lower for commercial scale power plants, those plants have other costs to deal with, such as connecting the plant to the electrical grid.